MUST SEE Victoria Secret Bombshell Bra Before and After Photos

From one of the lingerie business’ biggest companies, Victoria’s Secret’s Bombshell Bra promises to make you (or your boobs, at least) look like what the name suggests. As far as push-up bras go, this is probably one of the most popular in the market. Kylie Jenner’s personal bra recommendation also didn’t go unnoticed.

In 2015, Kylie revealed this as her secret to picture-perfect cleavage and boobs, which propelled a boost in the bra’s reputation. What followed was a bunch of Victoria’s Secret Bombshell Bra before and after photos on various online publications and top fashion blogs – showing that it’s not just all down to mainstream hype. It really does work.

​Victoria’s Secret Bombshell Bra Before and After Photos

​How many times have you walked through the longest hallway in your house and pretended to be strutting on the Victoria’s Secret Fashion Show runway?

The chances of becoming a Victoria’s Secret Angel is probably 1 in 1 million. However, having boobs that look like they belong to a VS Angel is less out of reach, thanks to the Bombshell Bra. 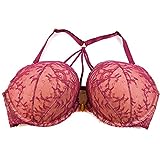 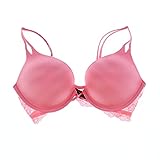 It promises to add 2 more cup sizes to your boobs, apart from the lift it delivers as any other push-up bras do. Lets just say that the Bombshell is not your average push up bra.

No matter if you’re small or extra large on that part of your body, the Bombshell has sizes that range from the smallest to the biggest possible ones.

No one and no body type is left out ​meaning everyone can create the illusion of a bigger bust.

For flat-chested women, cleavage suddenly shows when it usually wouldn’t.

For those with big breasts to begin with, they gain more definition and volume on top. It might sound too good to be true on paper, but before-and-after proof from real women say it all!

Related: See the review of Victoria’s Secret VS sports bra.​

​You could say the Bombshell bra was made especially for women who wear an A cup.

You could go from an A to a C in just seconds! With the Bombshell bra, your breasts’ appearance in clothes are upgraded from flat and small to full and round.

There are a couple of different bra styles within the Bombshell collection. For A cups, the Victoria's Secret Front Close Bombshell Bra with Strappy Back will give a visible boost to your bust. 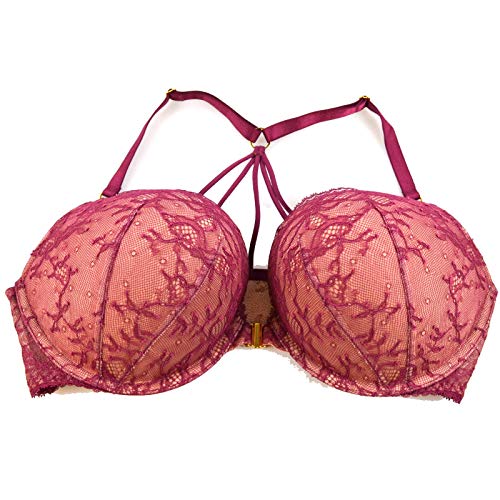 This Victorias Secret miracle bra is amazing for women with small busts! Before, you had to make an argument in defense of your small breasts’ existence because they suddenly disappear under tops.

The Bombshell bra can just do the talking for you by showing how perky your breasts can actually be without baring yourself.

The push-up also shows a hint of a shadow at the center of the breasts to create a cleavage, if only an illusion.

​With a regular non-push-up bra, women with this size still have some kind of curve indicating where their boobs are, but chances of cleavage showing are slim to none. Compared to most other sizes, a B cup is still considered to be on the smaller side.

Since the Bombshell is abundant with foam, the extra thick padding will help fill up what your breasts lack. The cups make it seem like there’s so much more boob than it’s holding. If you want a Bombshell bra that closes in the back and has a sexy lace band, the Victoria's Secret Bra Bombshell Add 2 Cups V Strap Detail is a great choice. 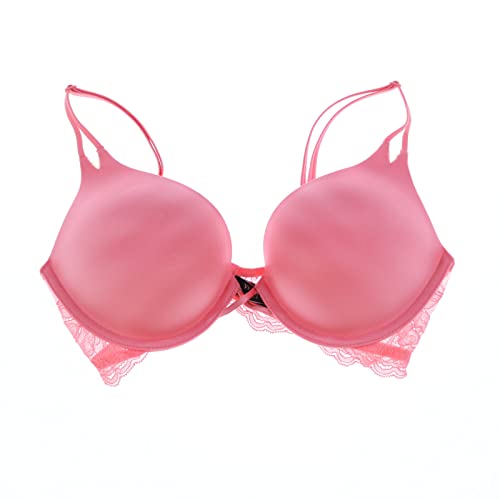 In reality, it just adds up on the bottom so your breasts can sit on top of the foam and be pushed together.

A kissing cleavage (where the breasts touch at the middle to create a prominent line) is exactly what’s created by the Bombshell for this size.

B-sized women already have the boobs to create one but without any assistance from a bra, each boob stays on their side. In this case, the Bombshell provides just the right push, without creating any bra bulges from being on too tight.

​A C cup can generally be considered the average. Depending on a woman’s body type, she can be a C but it’s either leaning towards the smaller side or the bigger side. Either way, women with this size are not lacking in boob.

This is where the Bombshell bra may start to be a little over the top. It promises to add 2 cups, so the Victoria's Secret Bombshell Add-2-Cups Push-up Bra would make C into DD or close to it. 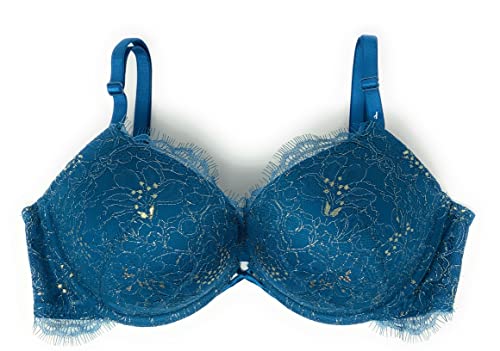 In fashion, it’s important to get the proportions right. A DD would probably look fake on an average-bodied woman who’s usually a C.

Even the Bombshell bra can’t have full control over what real women would look like despite having similar sizes.

Women’s bodies are complex but the Bombshell stays true to its promise, in one way (the extra cup size) or another (the cleavage) – in this case, it’s more the latter than the first.

​Women with D cups can easily show off boobs and cleavage without any help from bras, much less foam padded push-up bras. Women on this side of the spectrum don’t necessarily need this bra to give them larger assets, in fact, women with D sized breasts usually go for minimizer bras​- so why might you want one if you’re a D?

If you’re looking to show off some deep cleavage like a plunge bra would, this bra will help with that. Because it adds 2 sizes to your chest, it will also smooth out an unevenness you might have with your boobs.

Since its main purpose is to add on the boob size, there aren’t as many benefits for big busted women. This might also be why the largest cup size it comes in is DD.

​There’s no doubt about the effectiveness of the Bombshell. Even Kylie Jenner was once rumored to have had surgical enhancements because of it. Despite the good reviews, it’s also no secret that it feels like “a sofa strapped to the chest.”

Anyone can appreciate some added definition to the boobs. Make sure it’s used appropriately to your size and the occasion and it will deliver pleasing results.

We give away a free bra every month!

Thanks for entering our Bra Giveaway!

We'll be announcing the winner through email at the beginning of the next month, so stay tuned!